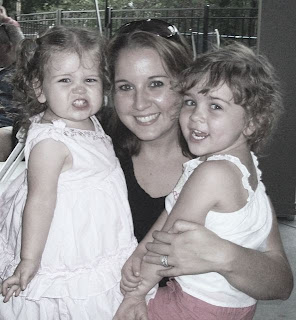 I received this great picture of my niece and her two daughters earlier this week. From left to right its Addi, Sarah, and Stella. Great picture, eh?
Posted by Arch's Blog at 13:49 No comments: Links to this post

Email ThisBlogThis!Share to TwitterShare to FacebookShare to Pinterest
Labels: Sarah and her Girls

Welcome to the World of Sling 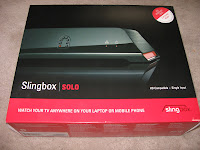 Did I mention that Ladan gave me a Slingbox SOLO for my birthday? Nice stuff. She got it off of Amazon, which had the best price by a long shot. One nice feature is that the Slingbox can be tucked away, out of sight. It doesn't use an IR remote control since you control it all from your PC. I put mine in the cabinet behind the TV and ran all the wires behind the cabinets. It's hooked to the component jacks of my HD TiVo so I can stream both live or TiVo'd shows no matter where I am.

I did buy, for $30, the Sling player app on the iPhone. It's a great addition. It comes in handy when I'm traveling around town or around the country. It requires that I be on a WiFi connection, but that's not generally hard to find when I'm in a fixed location.
Posted by Arch's Blog at 22:26 No comments: Links to this post

Restoring Government of, by and for the People

At first, this might sound like an impossible idea, but I think that over a sufficiently lengthy implementation period, perhaps five years, it could be made to happen successfully. Please read this with a long term mind set...

It occurs to me that one way to move our government forward, to make it more in touch with the people again, to make it more responsive to the needs that each of the departments of the government serve, and to increase it's ability to function in a time of national crisis, would be to disperse it.

I propose that each department of the US government be moved out of Washington DC to a new location more aligned with its function.

I can't even name all of the departments, and I'm sure lots of good thought beyond my thinking ability (and probably graft beyond my comprehension) could be put into the best locations for each department. These are just some examples off the top of my head. Defense should be in the geographic center of the continental US, not sitting on the coast. Why not Minot, ND?

I'm suggesting that the entire headquarters of each of the departments be moved out of DC and to these new locations. There should be a limit of one department per state (or territory). The current employees of each department should be invited to move to the new HQ, or for staff that don't want to relocate, positions would be opened and replacements hired into the new locations. And by HQ, I don't just mean the office of the Secretary of each department, but the entire staff currently working in and around the DC area.

Essentially, Congress, the Supreme Court, and the President should remain in DC. The cabinet secretaries would have offices at the new HQ's of their departments, and they would need to telecommute to DC for cabinet meetings. An occasional trip to testify to Congress or something would be as routine as an occasional trip today out to do the Department's business.

Frankly, I'd hope there would be a lot of turn-over in staff. But I don't suggest that it should be done harshly since everyone would be offered a job in the new location. Relocation benefits might not be offered because of the extreme cost of moving all those people.

In addition to the movement of the department workers, there would also be a large movement of the beltway bandits associated with each of those departments. This would strictly be by their choice, and not part of any federal action. But business tends to go where the opportunity is.

The survival through dispersion benefit is more of a "knock off" rather than an important part of the plan. But imagine the impact on our country if DC were to be devastated by attack or natural forces. Sure the government has contingency planning to deal with an emergency, but how crippling would it be if it had to be used?
Posted by Arch's Blog at 12:48 No comments: Links to this post

Updated on 22 Jan 2012: I now have an iPhone4, for about a year now, and I'm updating this post and my suggestions to reflect the current state of the phone.

I finally took the plunge and moved to an iPhone 3G over the holidays. I've been lusting after one since the first generation came out, then decided to wait for the 3G models to roll out. Since I didn't feel like standing in the lines or pre-pay-ordering a 3G phone when the supply was low I stood back and waited. Then came all of the press about dropped calls and poor 3G coverage and I waited some more. So finally over Christmas my son Sam and my wife Ladan pushed one on to me. I couldn't be happier.

You might know that I had a Palm Treo 650 with Verizon and had been using it for perhaps 4 years. It was a good smart phone in its youth, but its lack of contemporary features was really showing its age. No one in the press had anything good to say about the newer Treo's so I didn't go there. Though I loved the TomTom GPS system that I ran on the Treo and I miss its turn by turn directions. But there's a Google Maps application that's well integrated into the iPhone that, with its GPS location ability, does a worthy job of getting me places.

I looked at the Blackberry Storm that Verizon pushed out onto the world, but I found the touch-and-push screen weird. It seems that it's the worse combination of the cons of a touch screen and the cons of a thumb keyboard. I'm sure users get used to it over time and since they've sold a million of them, I hear, obviously some people must like them.

All of the other "traditional" Blackberry's looked worthy, and my son has a Curve. My brother-in-law has a Bold with a Roger's logo on it (an unlocked phone from Canada). They are not bad at all. But their browser isn't close to the visual quality of the browser on the iPhone and I really enjoy using the iPhone as a MID at home. And then, of course, the WiFi in the iPhone kicks the Curve (which lacks WiFi) into the dust.

The Apple AppStore is just wonderful. For about $53.92 I've decked out the iPhone with several very functional applications and several fun applications. I've gotten an engineering calculator. I added a file transfer utility that lets me connect to the iPhone from my computer over WiFi and that lets the iPhone be an FTP client. I put a free e-reader on it and pulled down a bunch of content from Gutenberg (which the app supports directly) as well as a set of PDF files from my own archives. The big ticket item is the Slingplayer for the iPhone, but even with its WiFi only limitation, it's a great tool. There are so many iPhone apps that the AppStore's structure is just too weak to make finding what you want easy. Apple needs to do something to make the AppStore easier to browse, and it doesn't need to do it by getting rid of a lot of the product. If Apple asks me, I'll give them some ideas.

I've played with HTC's G1, and found it interesting and a good first effort, but it needs a lot of maturing before I'd want to run my life on it. I hope that it and future Android phones help to push the market up the feature curve fast. I have lots of hope for that product. 22 Jan 12: Android is alive and well and a very functional challenger to the iPhone. See below for my main concerns about Android phones.

Also, Palm's new Pre phone looks interesting, and I'm made more curious by the rave reviews it got at CES '09. I've not had my hands on one though. The reviews of it state that its good and it might save Palm, but its not going to displace the iPhone.

Here's my list of what Apple needs to do with the iPhone. I've updated and renumbered the list since loading OS3.0 onto the iPhone. Some of these are well known gripes:

x) Added sync integration between Outlook and iPhone Notes. (In OS 3.0, but the notes app clearly needs to support "folders" or what Outlook calls categories.

x) The iPhone4 camera is much improved. I've shed most of my camera add-on apps and often use the phone's camera for candid shots. It's no SLR, but it's very handy.

4) There's no CODEC for MPEG2 or for WMV. Most motion video Emails I get use WMV. But I did find an App, finally, that integrates with Email and allows the play of many formats. It's called "OPlayer Lite".

5) You still can't see Flash objects in the browser.

6) Back Button. When you leave an Email message by following a link to a web page, and you leave the web page to follow a link to a YouTube clip, you can't "exit back" from YouTube to the browser then from the Browser to the Email message. The iPhone has multi-tasking, but it needs a back button. Maybe the could overload the volume button?

7) The new Reminder's feature is lame. You need to be able to send them. It would allow someone to send me a grocery list (like on that Microsoft commercial). They need to integrate with Outlook.

8) Finally, a "double press" of the button to get to the running apps menu is very difficult. As often as not, I end up in the wrong place.

9) Siri. How rude of Apple to yank Siri from the App Store and reserve it iPhone4S on its servers. There are a number of jail breaks that let an iPhone4's use Siri by lying to the Apple servers. Just proves that it's Apple being mean to its customers.

10) The navigator needs voice prompts. It's rather dangerous without them.

I could list more smaller things, but those are my key gripes.

2) I despise the features of the native Email client. It really lacks the ability to have it "auto-blind-copy" an address so that I can save a copy of my outgoing Email.

3) Upgrades. The lack of commitment to keeping phones upgrade by the OEM's is sad. I can understand their need to sell new phones, but it doesn't well match the 2 year commitment the phones are sold with. Hear that Samsung? I'm talking about you!
Posted by Arch's Blog at 09:57 No comments: Links to this post