In honor of the expression of free speech by the team at Charlie Hebdo and everywhere else in the world that supports it: 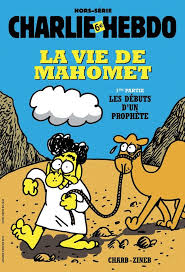 If you believe in God, you can be sure that He will wreck vengeance on you if you commit murder in His name.

Quoting Salman Rushdie from Time: "I stand with Charlie Hebdo, as we all must, to defend the art of satire, which has always been a force for liberty and against tyranny, dishonesty and stupidity. Religion, a medieval form of unreason, when combined with modern weaponry becomes a real threat to our freedoms.  This religious totalitarianism has caused a deadly mutation in the heart of Islam and we see the tragic consequences in Paris today."

And quoting Rushdie from brainyquote.com "But there's one thing we must all be clear about; terrorism is not the pursuit of legitimate goals by some sort of illegitimate means.  Whatever the murderers may be trying to achieve, creating a better world certainly isn't one of their goals.  Instead they are out to murder innocent people."
Posted by Arch's Blog at 13:02 1 comment: Links to this post