I am a strong supporter of civilian gun ownership, without restrictions.  My support is based on the US Constitution and the 2nd Amendment: "A well regulated militia being necessary to the security of a free state, the right of the people to keep and bear arms shall not be infringed." Just as I would hate to see the First Amendment over-ridden by the President, a State, or local laws. Both are fundamental to the rights expected by citizens of the United States

There has been a lot of slanted reporting in the press lately about shootings, to say nothing of hyperbole from our elected officials. Here's a linked list of some of the more recent well publicized shooting incidents: The Sandy Hook Elementary School shooting in Newtown, CT, the theater shooting in Aurora, CO, the Clackamas Town Center Mall shooting near Portland, OR, the Taft High School shooting near Fresno, CA, the Webster, NY First Responders shooting, and the St. Louis Stevens Institute of Business and Arts shooting.

Certainly all of these make for compelling reading. And together along with other news stories, comprise something that makes you wonder what's going on? What's caused the rash of shootings? Essentially, I have to conclude, no one knows. No one can get into the heads of the shooters. Some of them are labeled as unstable. Some of them are legal gun owners and some of them are not.

The myth of "assault weapons".  There's a great attraction on the part of politicians and the press to label any semi-automatic weapon as an "assault weapon".  To my knowledge, non of the weapons used in the shootings listed above are really assault weapons.  An assault weapon is one that a military will use to arm its troops.  It includes fully automatic and burst mode weapons that are illegal for individual citizens to own in the US since at least 1986.  But just because a semi-automatic rifle has a flash suppressor, a folding stock, a bayonet attach point, or a scope rail, or is made to look like an AK-47 or an M-16 variant does not make it an "assault weapon".  It's not the physical shape, color, or weight that makes a handgun or rifle deadly.

The myth of "large magazines". The press and the politicians are also greatly concerned about "large capacity magazines" and the "thousands of rounds of ammunition" purchased by the Aurora theater shooter. Anyone with a limited amount of training can remove a small magazine and replace it with a full magazine on a handgun or rifle in under 2 seconds. Remember that President Kennedy was killed with a single-shot, bolt action Carcano rifle fired by Oswald with the use of a 4-power scope. It's not the magazine size that makes a weapon deadly.

You don't need a large clip or a cool looking weapon to kill a lot of people. What you need is a mental defect and the will and skill to kill people. There are many incidents of mass killings without the use of rifles and handguns. For example, Oklahoma City, 9-11, the Unibomber, the 2001 Anthrax attacks, Auschwitz, Joseph Stalin, Mao Zedong, and numerous others.

Sen Gloria Feinstein, one of California's proud products, help create an earlier so-called Assault Weapons Ban, has promised to introduce a bill restricting assault weapons on the first day of the current session of Congress. (It appears she failed to keep that promise.) Her site reports that "A Justice Department study found the Assault Weapons Ban was responsible for a 6.7 percent decline in total gun murders. However, since the 2004 expiration of the bill, assault weapons have been used in at least 459 incidents, resulting in 385 deaths and 455 injuries." I'm sure you can see that her note plays with the numbers to support her case instead of presenting a truthful version of the facts. (She cites a percentage decline without providing the two points being compared, and then makes a false correlation between that claimed decline and some raw numbers post 2004.)

Chicago has a complete ban on handguns, but there were more deaths in Chicago from handguns in 2012 than coalition forces in the Afghanistan war in that same year.

The Supreme Court of the United States (SCOTUS) found the banning of citizen owned weapons to be illegal. And yet the State of New York passed a new ban that flies in the face of the SCOTUS decision, and Washington DC continues to "push back" on the Court's finding. I have to conclude that "the rule of law" is only respected when it is convenient to these highly Democratic-party governments. Hopefully the ALCU will recognize the infringement of rights the common man is facing due to these laws and file cases to overturn these over-reaching laws. The ACLU's mission, after all, is "to defend and preserve the individual rights and liberties guaranteed to every person in this country by the Constitution and laws of the United States. In this the ACLU and the NRA (of which I am a member) should be coordinating their court actions.

FactCheck.ORG has an interesting article on gun crimes, ownership, and deaths. I expected it to be one-sided and am surprised that it seems fairly level. It notes that despite increased gun ownership, gun deaths are down, gun suicides are up, non-fatal wounds are up. They say lots of things, and here's one quote I like: "The United States has the highest rate of gun ownership in the world, by far. And it has the highest rate of homicides among advanced countries. And yet, gun crime has been declining in the U.S. Firearm murders are down, as is overall gun violence, even as gun ownership increases. Read our Analysis for more insight on what these statistics mean.". Please read the linked article to get the context. I'm not trying to misquote them here.

Movies and Video Games: Is there any actual correlation between these high-revenue industries and gun violence? Do Dirty Harry and Grand Theft Auto cause gun violence, insanity, or other types of violence? I don't know. It makes an interesting discussion point. But certainly I have enjoyed many violent movies and my son played Halo for years. Both of us have access to guns. Neither of us have used them in a criminal manner.

I hope the madness and grandstanding end soon before we all lose our rights of free speech, assembly, a free press, and our ability to stage a peaceful demonstration to petition the government. These rights come to us from God. They were not given to us by the Government to be taken back. "We hold these truths to be self-evident, that all men are created equal, that they are endowed by their Creator with certain unalienable Rights, that among these are Life, Liberty and the pursuit of Happiness (US Declaration of Independence).

Update: Here's the URL of an interesting YouTube clip which claims that at least several of the recent killers are registered Democrats.  http://www.youtube.com/watch?v=acu1aB86dBM.  All I can see is that if it's true, you have to wonder, eh?

I couldn't have been more surprised to see Louisville not only win the 2013 Sugar Bowl, but to win it convincingly.  I had expected a big Florida win.  Time for me to eat crow.  Excellent game by Louisville from the first play to the last.  The UL defense was better than I saw it all year.  And the UL offense was effective against the highly regarded Florida defense. 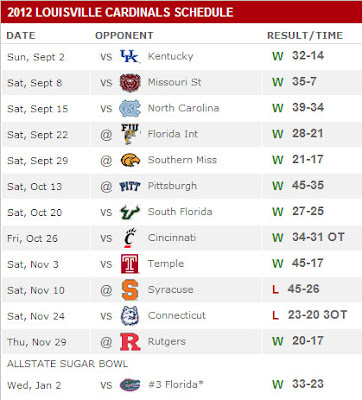 Posted by Arch's Blog at 21:57 No comments: Links to this post