My most heartfelt thanks to the people of our military, and that of the UK. You stood tall for all the years of this war and served your nation proudly. You have done a great service for the people of Iraq, and for the world. You've freed Iraq from the ravages of a terrible dictator and established the beginnings of a functioning democracy in Iraq. I pray that the people of Iraq prove worthy of all that you, and us, have sacrificed for them.

What was accomplished? We removed Saddam Hussein and his power structure from the backs of the people. We've replaced the tyranny of that one and his vicious police state with a constitutional government. We eliminated a mad-man that sent money to the parents of suicide-bombers. We crushed a paper military that wasn't able to fight a real threat, but only served to support a dictator by murdering his own country-men that questioned his authority. We eliminated a man who used weapons of mass destruction not only in his war with Iran, but against his own Kurdish people.

War isn't pretty. It is the end result of irreconcilable political differences. Saddam played a game of pretending to have WMD's, and his pretence fooled everyone. Much to his own demise. The card he hoped would shield him turned out to be the seed of his own destruction. Good riddance. His hanging was well deserved retribution by a long suffering people.

Time will tell us what happens to Iraq and the people we left in charge of their own futures. They may sacrifice it to Iran. They may replace Saddam with another monster. They may grow a government of, by, and for the people. I don't know.

Welcome home men and women of the US armed forces! Welcome home! Thank you!
Posted by Arch's Blog at 22:23 1 comment: Links to this post 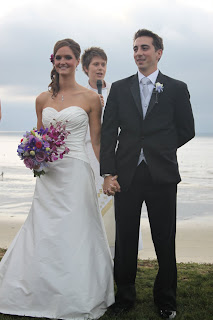 14 October, 2011, La Jolla, CA: Sam and Mariette married in a beautiful location along the beach in the company of many family and friends from both sides. It was a well planned event that came off beautifully and with the planned result; a wedded couple. Mariette and Sam are a lovely couple, and we're so happy for them.
Posted by Arch's Blog at 18:00 No comments: Links to this post 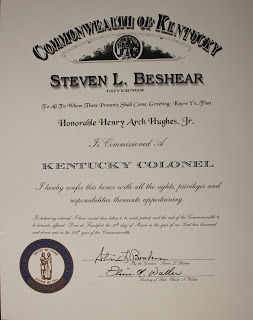 Thanks to mom, I've been commissioned a Kentucky Colonel. A hip hip hooray to the Colonels for their charitable work!
Posted by Arch's Blog at 17:25 No comments: Links to this post